Anything I write on this blog is my opinion only. It reflects neither policy nor consensus among the faculty and staff at the Center for Justice and Peacebuilding at Eastern Mennonite University.

Do the Right Thing

August of 2019 will mark 400 years since the first documented arrival of Africans who came to English America by way of Point Comfort, Va. The legacy of slavery and racism in the United States is deeply embedded in the history of the Commonwealth of Virginia.

Virginians are at a ripe moment for deep cultural, political, economic, and social change. But to harvest that moment we need to ask ourselves, “What does it mean to ‘do the right thing’ when we learn that the Democratic Governor of Virginia (Ralph Northam) participated in a culture that condoned the donning of blackface and KKK outfits at parties during medical school?” At a minimum, a picture documenting that practice appears on his page in the medical school yearbook. At worst, he was in a photo dressed either in blackface or as a member of the KKK. And the Democratic Attorney General has come clean about donning blackface at age 19 while dressing up as a rap star he admired.

In the 1940s Gordon Allport introduced that idea that Whites in America projected negative attributes such as laziness, emotionality, promiscuousness, incivility, stupidity, and criminality onto other social groups — often onto African Americans and other communities of color — in order to appease their guilt about their own behaviors. This process known as racial scapegoating is an American pastime.

But, as Dr. David St. John points out another form of racial scapegoating has gained traction in recent decades. It is particularly popular among White liberals. St. John, was discussing the uproar that followed the revelation that the owner of the L.A. Clippers (Don Sterling) and the anti-government rancher Cliven Bundy used extremely offensive racial epithets and held openly racist beliefs.

“In a country where Persons of Color are routinely denied fair access to education, housing, health care, and employment; where African-Americans, Native Americans, and Latinos are systemically exposed to unjustifiable rates of school expulsions, arrests and prison incarcerations; and where most White Americans either deny that such institutional racism exists, or shrug off such evidence with snarky little statements like ‘life isn’t fair,’ is it any wonder that we find it irresistible to scapegoat such easy targets of racism as Sterling and Bundy? Every few years, when the opportunity presents itself, White Americans—liberal and conservative, Republican and Democrat, educated or not—rally around an effigy of White racism, light a match, and sigh in relief of our virtue.”

So, what is the “right thing” in Virginia in 2019? How do we hold Northam and Herring accountable without avoiding this opportunity to name, examine, and change the racist systems and institutions that are foundational to the way of doing politics and organizing our economic and social systems?

When will they (we) ever learn?

A former student posted a link to this paper on Facebook today. I had forgotten about this interview (done in 2004). The reporter did a really nice job of getting a lot of detail into the piece. 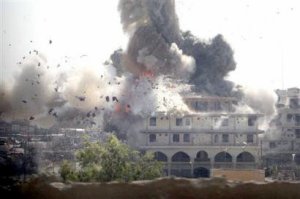 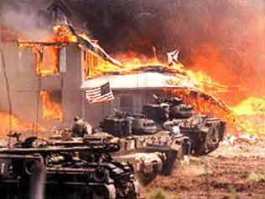 There is something to be learned here about how systems (manifesting as repeated patterns of social interaction) move from one location to another. From Waco to Iraq to Ferguson to Baltimore… to…  NOT that these situations are all identical. Ferguson was not (is not) Baltimore and Iraq was not (is not) Waco. But what are the similarities in the way leaders (on all sides) respond? What systems are we replicating in new ways in new places? The drivers appear to include:

2. Structures that can allocate resources to act on that narrative

3. Structures that block or interfere with feedback that would disrupt the narrative

On this Mother’s Day, I hope and pray we start to unwind and undo the drivers of this sytem… for the sake of our children and our grand children.

Policing in the United States: Where do we go from here?

On December 9, I gave an interview to Patrick Shaver from the “Officer Involved” project. Patrick is a police officer who has a graduate degree in conflict management. He started the “Officer Involved” film project more than a year ago with the goal of documenting what happens to police officers who are involved in shootings in the line of duty. Post-Ferguson and similar events, this question sounds different and it would be easy to “pile on” the current media story that can portray police with little sympathy.

As with all complex system problems, the questions being raised about policing have to be located in context to be understood and addressed. In context, when we really ask careful questions, we might find some surprising information. Death of officers by gunfire in the line of duty is up 59% in 2014. (I originally heard 65%. Either way, it is a significant increase.)

My conversation with Patrick was far-ranging and included a number of system observations that did not make the final cut. I’ll try to develop some of those in other postings. Meanwhile, you can listen to the podcast here: http://www.officerinvolvedproject.com/podcast/episode2

Moving forward will require a careful and more complete framing of the issues.

To Summarize My Main Points about EMU and MCUSA

1. EMU is no longer a primarily Mennonite university in terms of demographics. The majority of the students are not Mennonite, particularly if you count the graduate students, Intensive English Program students, and those enrolled in the Adult

2. EMU is a powerful expression of Anabaptist values. In my view, it is the premier Anabaptist university with worldwide reach and influence. Its Anabaptist roots have created a university that is not only Christian like no other, but university like no other. We have an approach to knowledge and engagement with the world that is leading edge, because it focuses on: complex social problems that are cross-disciplinary and that require new ways of defining the problems, not just new ways of answering old puzzles. The Anabaptist commitments to nonviolence, justice and community create a frame for changing intellectual discussions that have been dominated by incorrect assumptions about human nature, our relationship with the planet, and our purpose in life. Our Anabaptist commitments also allow us to engage with powerful actors without being pulled into their frames and assumptions about the world. END_OF_DOCUMENT_TOKEN_TO_BE_REPLACED

An OTM @ EMU on university as a parachurch organization

EMU is already functioning as a Mennonite-founded parachurch organization.

I ended my last posting with this controversial claim. So, I should explain why I say that.

I used the following definition of parachurch organizations with the phrase that is most likely to concern some of my colleagues at EMU highlighted.

My colleague Roman Miller wrote in the Weathervane, “As a parachurch organization, I believe EMU should walk along with the church and not make a premature decision which will enhance division and mar the body of Christ.”

The question is, which church is he talking about?  I think Roman means MCUSA. That might make sense, except that parachurch organizations are not related to a single denomination. An organization related to a single denomination is a church agency, not a parachurch organization. Much as Roman might want to avoid enhancing the divisions in the Christian community and in MCUSA, the reality is we (Christians) are already divided on this issue. And we will be for quite some time, I think. Just as we have been (are) divided on the role of women in church life, divorce and remarriage, and a variety of other issues.

If we are a parachurch organization, the question is, “How can we live with our divisions while working together on other goals — such as providing a high-quality, Anabaptist-influenced education (EMU) or relieving poverty (e.g., World Vision)?”
END_OF_DOCUMENT_TOKEN_TO_BE_REPLACED

Why blame EMU for the fragility of MCUSA?

Individuals on and off campus are worried that a change in EMU policy regarding hiring LGBT individuals in committed relationships will “push MCUSA over the cliff” into schism. I understand the fear. But I question logic.

I arrived at EMU just in time to help celebrate the re-merging of the schismatic Mennonite community into MCUSA. Having just published a book on negotiating worldview conflicts, I had a lot of questions. “How,” I asked Ervin Stutzman, “did you all renegotiate the worldview and cultural patterns that led to the splits in the first place?” He looked a little stunned, and then he acknowledged they had not focused on that issue, but had instead focused on the merger of organizations and other problems. Fair enough; those were difficult issues.

However, it meant that MCUSA was built on unstable ground because little or no attention was given to the underlying problems that led to the Mennonite alphabet soup (OM, OMB, MB, GC, MC…) in the first place!

Like the Church built on a chalk cliff in Stevn’s Cliff (Denmark), MCUSA has been moving towards the cliff since its founding.

END_OF_DOCUMENT_TOKEN_TO_BE_REPLACED

Questions from an Other Than Mennonite (OTM) @ EMU Part One

As the child of a military officer, I spent a lot of time as “the guest” in various parts of the United States. It made me a keen observer of cultural norms and an attentive listener for narratives that reveal community worldviews. The tendency to share those observations and ask hard questions — and the resulting discomfort that asking questions can create — is just my personality, I think. I once told my mother, “I can’t help naming the elephant in the room.”

To which she replied, “Jayne, you can’t help pointing out an ant that is walking across the room.”

END_OF_DOCUMENT_TOKEN_TO_BE_REPLACED

What I want MCUSA to know about EMU

When EMC became EMU those who questioned this move were assured that the core mission of the school and its commitments to the church would not change. I believe those assurances were given in good faith, but they were incorrect. I can understand why some who opposed the change feel betrayed by what EMU has become, and I am sorry for that, but I do not think it was intentional.

I also think the changes that upset them actually started with the decision in 1982 to establish a Cross Cultural Program that requires all students to travel out into the world with faculty members. The Cross Cultural Program  set in motion new ways of thinking about education, new ideas about what the future might hold for our graduates, and a host of smaller changes that we are still feeling our way into. At its core, sending students out into the world challenges the idea that the church can (or should) remain separate from the world.

END_OF_DOCUMENT_TOKEN_TO_BE_REPLACED

Is EMU leaving MCUSA or has MCUSA (or parts of it) left EMU?

This question came up when faculty and staff were discussing the relationship between MCUSA and EMU. It felt familiar. It probably felt familiar to anyone who has been through a divorce. At first, I thought, “Yeah! THEY left us! Or at least a whole bunch of them left us! How dare they say we are the ones leaving? They don’t send their kids here, anymore. They accuse us of betraying the church values and teachings. They question our integrity and our credentials as a Mennonite university.”

In every “divorce” there are recriminations like this, usually around who betrayed the relationship. Then I realized, this makes my stomach hurt.

I’m not interested in having EMU and MCUSA divorce. But the relationship we have can’t continue as it is. END_OF_DOCUMENT_TOKEN_TO_BE_REPLACED

Power for the People VA

spirituality, freedom, and community in the way of Jesus

The Art and Craft of Blogging

The latest news on WordPress.com and the WordPress community.